Before we head into this, we want to give a huge shoutout to Hampsh, a Supercell YouTuber who makes some great content about Brawl Stars, Clash Royale, and Clash Of Clans. Make sure to check him out! This article on the best common card will be based on one of his videos. If you would like to skip straight to the video, go here. Otherwise, it’ll be at the bottom of this post.

Is the Knight the best common card in all of Clash Royale? According to Hampsh, it is. Today, we’ll be taking a look at why he’s right when he says the Knight is debatably the greatest card of its rarity.

As you probably already know, Clash Royale is an immense game with an endless amount of possibilities. That being said, some cards seem to work better with certain decks. The Knight, however, is one of those cards that, if used well, can be used with any deck.

Sure, the Royal Giant and Elite Barbarians are also great cards for their rarity, but “they’re only strong in the lower arenas.” In contrast, the Knight is one of the go-to common cards that will be seen anywhere from Arena 1 to competitive match play. Some reasons for this are its low elixir, high value, and versatility. 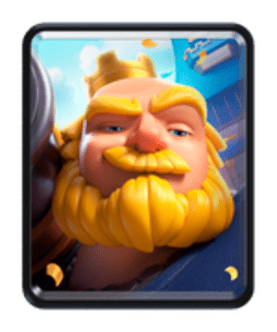 Let’s compare the Knight to the other contenders for best common card by taking a look at their “good sides” and “bad sides”.

Good side: The Royal Giant is a great common card that can really help put a couple of holes on the enemy tower.

Bad side: You need 6 elixir to use him, and he can be countered by Inferno towers and many other troops.

Good side: These virtual versions of Usain Bolt are the fastest common cards. They’re pretty strong too.

Bad side: They’re worth a whopping 6 elixir, and they’re no longer the meta dominator they used to be.

Knight
Good side: This versatile character can be used effectively on both offense and defense.

Good side #2: Costs much less elixir than the other contenders for the best common card — 3!

All jokes aside, the Elite Barbarians and Royal Giant are still debatably the best for their rarity. The Knight’s low elixir, however, makes it a high-value card.

From tanking for a Hogrider on an offensive push to defending a tower against a Valkyrie, the Knight is quite the versatile card. It’s one of those cards that always seems to do the trick, no matter what it is.

Let’s take a look at some of the ways the Knight is used in Clash Royale!

Due to them each individually thriving in certain situations, there is no clear-cut winner on who the best common card is. However, if I had to choose, the Knight is slightly superior to his opposition due to his high value for low elixir and versatility. Thankfully, I have Hampsh to back me up on this.

Check out Hampsh’s video on this same topic down below! Not only will you get to watch a video on the game you love, but you get to hear his wonderful singing voice at the beginning… Check it out! 🙂

We usually only cover Brawl Stars, hence the name of the site, but I hope you guys liked us stepping out of the box a bit. If you didn’t, don’t worry! We will return to pumping out Brawl Stars content daily as usual!

This article is kind of like an introduction to our new partner, Hampsh. We hope that this partnership will prosper long into the future!